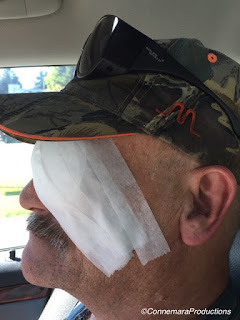 Today I gave a ride to a Marine ( its a title for life) that got severely injured in Nicaragua supporting the Contras. His eye surgery today was not related to those adventures. Missing fingers and a dysfunctional arm with a metal pin in it were the results of hand to hand combat with Sandinesta fighters.
A bit of history. Ronald Reagan authorized a secret incursion of "off the books" troops to take on the bad Sandinestas. "Battling the Cuban-backed Sandinistas, the Contras were, according to Reagan, "the moral equivalent of our Founding Fathers." Under the so-called Reagan Doctrine, the CIA trained and assisted this and other anti-Communist insurgencies worldwide."
Some of you recall the hearings with Ollie North, sweet Fawn Hall et al who all lied about everything including selling missiles to the Iranians in order to finance this secret "non-war." Enough history.
My friend today has yet to receive benefits to his injuries in the jungles as the caper wasn't authorized by the USA government. He does get VA, some SS monies for his disability.
So, when you hear all the Republicans cheering their vets and Ronald Reagan (praise be his name) know its all malarkey----