Pride in Our President

Since President Barack Hussein Obama spoke out in support of same gender marriages I have noticed a measurable up tick in positive statements, from many I speak with, towards the future.
People are happy this Civil Right has been addressed by the president, even though it might cost him some support in his campaign for the presidency.
Some are saying they are so happy they could actually accept his defeat because he did the "right thing."
Doing the "right thing" seems to be what has been missing in our politicial discourse for a number of years.
The cynics want to denigrate his support as a total political move, as well as adding new attacks to ramp up any racial division they can mine at his expense.

The presidents political opponent  recently visited Liberty University. The schools founder claimed homosexuality to be at the core of why the horrendous attack on 9/11 took place. Within two days of the attack Jerry Falwell, University founder, claimed God  was so angered by the rampant homosexual behavior in America that he closed his eyes, allowing the attack.
That Willard Mitt Romney would make the decision to speak at the University when their support of ongoing discrimination is vocal, is a mystery.

Thank you Mr. President for doing the right thing for all the citizens of America.

A Letter from the Heart 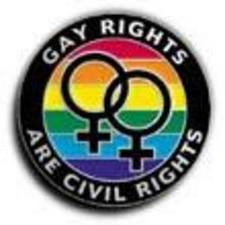 This is an actual letter received a day after President Barack Hussein Obama spoke up for equal ciivil rights and marriage opportunities for all citizens.

"Dear Everyone,
With the recent idiocy in North Carolina, followed by the glorious support from our POTUS & Senator Harry Reid, a lot of old feelings are stirring in my gut; feelings I shelved away back in 2000 after being personally devastated by the Prop. 2 Campaign.
Back then, I HAD a dream. I dreamed that one day, I would wear a gorgeous white dress & walk down an aisle on the arm of a man proud to be walking with me, toward a woman who loves me & will vow to always love me, in front of all our friends & family, who want nothing more than to celebrate & honor that love.
Since 2000, that dream has been shattered & pieced together again many times, as various state & federal governments teased me with the notion of human equality. And with each "PSYCH!", my heart broke a little. It's hard not to take that kind of blatant discrimination personally.
The Defense of Marriage Act has been cited against me~ ME, a girl who has always wanted to get married!
Protect Marriage, Protect Families, Save Our Children... from ME? ME???
I am a nanny, for goodness sake!
I LOVE my families and I eat, sleep and BREATHE children!
It finally got to a point where I had to emotionally withdraw from all of it. It hurt too much to fight and be systematically let down each time.
Civil Unions and Domestic Partnerships are the modern equivalent of separate drinking fountains for whites and blacks.
They are crap.
There is no such thing as Separate But Equal, just as there is no such thing as Don't Ask, Don't Tell.
Protect Marriage FROM DIVORCE!
Protect Families FROM PARENTAL NEGLECT!
Save Our Children FROM CHRISTIANS WHO MISINTERPRET THE WORDS OF CHRIST TO PROPAGATE HATE!
My emotions are stirring again... finally... as though there is actually a light at the end of this tunnel. At this point, however, should I even get excited? Cuz I've gotten excited before & had my joy dashed by ignorance. Is that daylight I see, or just reflections of strobe lights bouncing off a drag queen's sequined gown as we continue attempting to dance the pain away?
Sincerely,
Posted by Let Kids Be Kids Inc. at 2:19 PM No comments:

The Price of Cheese is What?


I must have dozed off when the price of cheese, per pound, became greater than the price of Copper River salmon.
There are competitions to see which Seattle store will have the salmon first!
High-end stores eagerly await the escorts flying in from Alaska to deliver the fish to jostling consumers lining up to throw down their dough for a slice of chilled ruby red salmon.

What’s going on?
Has anyone noticed prices lately?
Really, I must have hit my head and awakened into a land where just about everything in the store hovers near the $5.00 mark.

According to the Bureau of Labor and Statistics the average hourly earnings for those living in the USA is $23.38. That rounds out to around $48,880.00 a year or $4,073.33 a month. *
Most of us are concerned with that monthly figure in order to maintain.

A great many of the people I associate with, through Let Kids Be Kids, are making from $10.00 - $12.00 an hour. At 40 hours that brings in monthly income of $1,733.33 and $2080.00 respectively. (Most are not working forty hours)
Knock out the big one, rent or mortgage; add in medical, lights, sewer, water, gas for the guzzler, access to the internet, unless you are coughing up a $1.80 for coffee at Starbucks for free internet, bank fees, telephone, oh yeah, food etc. etc. etc
Some are servicing college debt.
At the end of the day you don’t have a lot of what they love to call disposable income. That money that you can make decisions with above and beyond the demands of just maintaining standing still.
That money that everybody wants and you don’t have to give.
You have no savings, no emergency money, and no additional money to give to your kid’s education, field trips, supplies, snacks in the lunch bag, if you have kids.
College for your kids – forget it!
No thoughts to ever having a vacation, a more reliable car or a moment when you are not fretting about money.

The store can offer you red kidney beans at $2.89 a tin, toilet paper at $5.20 a four-pack, day old chicken pieces for $6.00, fatty hamburger at xyz per pound, boxes of pasta at $5.29----on and on and on as you look to find eatable items with what money you have in your jeans.

You begin to look at everything as a percentage of that hourly wage you are so desperately trying to stretch.
Gas costs you a half an hour of labor per gallon.
Milk, creamer, sugar and mass produced coffee in a five-pound tin is an hour of labor.
Apples, bananas, grapefruit is an hour of income.
Boxes of pasta, discounted pasta sauce, tomatoes, garlic, onions, peppers, capers is an hour plus of your bankroll.

If you ever lose your grip and treat yourself to a film it will cost you close to two hours of pay. You might have no option but to pay for street parking, at roughly $4.00 per hour, but cheaper than a lot if you can get back to your car before that $48.00 overtime ticket. Add in your ticket and $5.25 for a small bag of popcorn and you’ve blown your wad.
Your extravagance brings you lots of guilt and little enjoyment.
You didn’t really deserve that popcorn!
You know you can never take anyone to the movies. Not your kids, a friend, or anyone.

The other day I took a man to a high school to talk with teenagers about what life is like for him as he fights the ravages of AIDS. He has $55.00 to spend each month. That’s it - $55.00 a month!! All his stay alive costs are covered by insurance, wiped out savings, gone 401k’s, AIDS programs, some debt, government programs and Social Security.

He apologized to me for me spending so much on his favorite Colonel Sander’s combination, accompanied by a gigantic Coke.
An hour and ten minutes of pay!

Something’s wrong out there in the land of the free and the home of the brave!

"Hey Mister, can Ya Spare a Buck?"


I chatted with Andrew today.
Andrew tends to hold down the corner of 50th and Roosevelt, just a tad west of the University of Washington.

Andrew came to the states after things began to go badly in Poland after the heady Solidarity days.
He is 62, from a little village about 30 clicks south of Kraków, home of Karol Wojtyła, and other notables.

As you can see from Andrew's sign he has a few challenges.
He has spent years in the "food service industry" working in various positions here and in N.Y. (that industry has the two lowest wages, and fewest benefits, of all jobs in the USA).
His arthritis has crippled him to the point where he can't hold down a job that requires much body movement.

In addition to that he has prostate cancer requiring fairly constant medical attention. He is being seen by doctors at Virginia - Mason though his insurance only covers roughly 30% of his costs.

He's been on the streets for the last seven months scratching out enough to pay some of his med bills in addition to his one room apt, food etc.

Andrew and I talked about Poland, Elie Wiesel, Szweykowski, Grabski and Walesa's time at the Lenin Shipyards where he raised so much hell-we talked about Auschwitz and Buna and the people who survived it...
We talked about the insanity of it all.
We talked about standing on a street corner hoping the next driver will reach out a helping hand.

I offer this mini story, as "these people" are people who deserve our support in any way we can offer it.
They are us in other clothing-
They don’t deserve to be put through hoops any more than anyone who is not carrying such challenges.
For those that have not spent much time around people on the streets you may find you enjoy the reality of your conversations.
I will go back and visit with him again this weekend. I will probably shoot a bit of video to add to the "Am I the Face of Homelessness" series that I've been doing since forever.....