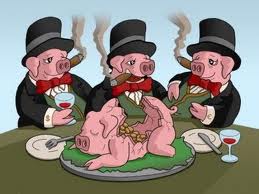 Recently, on 1 October, a friend ordered new checks from his bank.
He wasn’t paying attention to the pending charge and wound up over drafting his account by $3.31.
On the 3rd of October he called the bank to tell them he had goofed and there would be a fairly good deposit that would be made on Thursday the 6th. He informed the bank that there would probably be around $36.00 worth of charges coming in before he could make the deposit. He was told he would be charged $25.00 plus $8.00 a day until Thursday.
Outrageous, but manageable!
On Thursday he went to the bank to make a cash deposit of a few hundred dollars. He didn’t have a deposit slip so the teller had to look him up. While standing there he told the teller he was a few bucks over if that helped her identify his account. After a moment she said she had found the account and he was actually $232.00 overdrawn.
He was stunned but not too stunned to pass her the cash, which he knew would be used to balance the account. He stepped back asking if she could do a print out, as he had no idea how his account could be in such dire straights.
She printed him a couple of pages so he could see what was going on.
Well, there were eight debits at $25.00 a pop and four at $8.00. When he asked one of the people sitting at a desk what was going on he was told those were standard overdraft charges.
He staggered out of the bank to find a phone and call his branch. When he finally got to an officer he told them there would be a large automatic deposit on the 11th and would they consider reducing the accumulated charges. He was told that was not possible and charges would accrue until the account was back in the black. After a bit of conversation he was told that out of courtesy to his 23 years with the bank they would consider reversing some charges when the deposit arrived.
On the 11th his automatic deposit came in to be reduced by $328.00 for the accumulated charges.
He called the bank asking if they could flip the charges to his old line of credit so he could access the full amount of the deposit. He was told no that wasn’t possible. When he asked about reducing the charges he was told that if he looked at his statement they had already reduced them by a considerable amount.
Okay, lets make this simple; you borrow $30.00 for nine days from your bank. You are okay paying a fee but are you okay paying a total of $328.00 for the pleasure? That converts to a 1,100% interest charge for borrowing $30.00 bucks for nine days!!!!!!!!!!!
Yes, 1,100 % unless my math is faulty.
If your bank has a breaching Orca on its masthead you might consider running for your life.
My friend has ventured over to where the stagecoaches roam in hopes he won’t be crushed by runaway horses.
1,100 % !!!!!
The European banks drove the little guy out of the system decades ago. That is why so many in Europe use their local postal office to buy money orders, pay bills, make phone calls etc.
With the Republicans vowing to take down our Post Office you can see the day when you’ll be banking at a FedX, postal, bill paying, payday check cashing office with a giant symbol of the $ outside where the old flagpole stood welcoming you to the Post Office-
Ah, anything to protect those who praise money above all. The job creators who only charge you what the market demands of them to turn a profit.
Good luck-