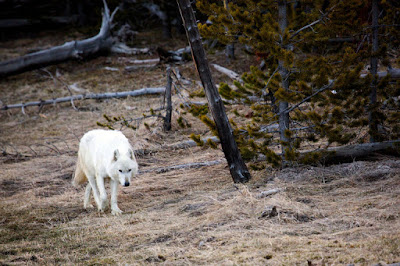 What kind of person kills such creatures??

"A rare white female wolf that hikers found as she lay dying last month on the north side of Yellowstone National Park in Wyoming was shot illegally, officials have determined.

The wolf had to be euthanized by park officials because of the severity of her wound.

She was the only white wolf living in the park, though there had been two others before her. She was 12 years old when she was killed, twice the average age of wolves in Yellowstone.

She was the alpha female of the Canyon Pack, one of 10 packs in the park, and she had paired with the alpha male for nine years. Over that period, biologists say, she whelped 20 pups, 14 of which lived to be adults.

After she was euthanized, the white wolf’s carcass was sent to the United States Fish and Wildlife Service forensics lab, and the preliminary results of the necropsy were released on Friday. Park officials are treating the shooting as a crime.

“Due to the serious nature of this incident, a reward of up to $5,000 is offered for information leading to the arrest and conviction of the individual(s) responsible for this criminal act,” said Dan Wenk, Yellowstone National Park superintendent, in a statement.

The shooting comes as park officials say they are concerned about the renewed hunting of wolves in Wyoming, which will begin this fall. Wolf hunting is already allowed in Idaho and Montana, states that border the park, though in Montana it is limited in hopes of keeping the impact on park wolves to a minimum.

Hunting wolves, even outside the park, conflicts with Yellowstone’s mission to protect the animals for study and for people to view. Wolves in the park have little fear of humans, and once they wander beyond the boundary can be easily taken by hunters.

The value of wolf watching in Yellowstone is pegged by studies at $35 million a year. Thousands of people come to the park to watch wolves, and the white wolf was seen fairly often. “She was one of the most coveted wolves to see,” said Douglas Smith, the park’s wolf biologist."

You can help by supporting our Endangered Species projects. http://tinyurl.com/jzdj4rpSaveSave