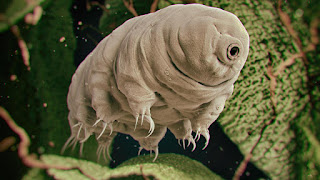 So, quit being a dick!!
"Water bears shall inherit the planet.
I hate to break it to you, but humans probably don't have that much longer before we go extinct—somewhere between 100 years and 5 billion years, depending on who you ask. Obviously, a human extinction event is unprecedented and incredibly hard to predict with any sort of accuracy. But according to new research from physicists at Harvard and Oxford, one thing is nearly certain: long after humans are gone, the tardigrade will live on.
The tardigrade, also known as the waterbear, is an 8-legged extremophile renowned for its ability to survive where every other complex living organism cannot. The tardigrade, a micro-animal that grows up to 1.2 millimeters and can live for up to 60 years, is able to survive for 30 years without food or water, endure temperatures up to 300 F, and can even survive exposure to the vacuum of space.
With credentials like these, it's no wonder that physicists predict the tardigrade will inherit the Earth—pretty much the only way to destroy it is if all of Earth's oceans were to boil.
"Tardigrades are as close to indestructible as it gets on Earth," Rafael Alves Batista, a physicist at Oxford, said in a statement. "Without our technology protecting us, humans are a very sensitive species. Subtle changes in our environment impact us dramatically. Life on this planet can continue long after humans are gone."
To test this hypothesis, the Oxford and Harvard researchers considered three astrophysical doomsday events that would be capable of killing every human (and most other living things) on earth: an asteroid impact, a supernova, and a gamma-ray burst.
As the researchers discovered, however, only about a dozen known asteroids and dwarf planets in the solar system (including Pluto) have enough mass that an impact would boil the Earth's oceans and pose a threat to tardigrades. Fortunately for the water bears, none of these objects will ever cross Earth's orbit.
As for supernovae, the spectacular explosion that occurs at the end of a star's life, this cosmic event would have to happen within .14 light-years of Earth to boil the oceans. Given that our closest stellar neighbor is 4 light-years away, the odds of a supernovae wiping out the tardigrade is negligible.
Finally, there's the gamma-ray burst, which is an extreme amount of radiation that is emitted during some supernovae. A gamma-ray burst within 40 light-years of Earth would turn our oceans into a roiling soup, but according to the physicists' calculations, the odds of this extremely rare stellar event happening in our galactic neighborhood before our own sun explodes and consumes the Earth is also negligible.
In short, the only cosmic events that would be able to kill Earth's most resilient species are so unlikely to happen that the tardigrade will likely be around to witness the Sun's explosion. The same can't be said for humans, which have to worry about more pressing apocalyptic scenarios like nuclear war, AI armageddon, overpopulation, or cataclysmic climate change, and other species, which mainly have to worry about humans.
Although this is a bleak picture for us, it actually paints an optimistic picture about life in the universe.
"As we are now entering a stage of astronomy where we have seen exoplanets and are hoping to soon perform spectroscopy, looking for signatures of life, we should try to see just how fragile this hardiest life is," David Sloan, a physicist at Oxford, said in a statement. "To our surprise we found that although nearby supernovae or large asteroid impacts would be catastrophic for people, tardigrades could be unaffected. It seems that life, once it gets going, is hard to wipe out entirely."

Motherboard
Posted by Let Kids Be Kids Inc. at 7:16 AM