These rare wolves are a unique species. 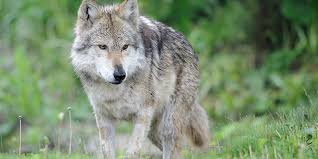 BY DOUGLAS MAIN - National Geographic - 5 April 2019
“It’s hard to  believe red wolves and Mexican gray wolves are still around: Both came about as close to extinction as is physically possible. Red wolves, for example, have plummeted to a population of 35 animals or fewer.
But despite incredible recoveries, both remain highly imperiled. These North American predators often come into conflict with people, especially farmers and ranchers. As part of this contention, some have questioned the scienceasserting the animals are unique species and worthy of protection under the U.S. Endangered Species Act.
Now, a federal study has put that question to rest. According to a report just published by the National Academy of Sciences, Mexican gray wolves are a unique subspecies (Canis lupus baileyi) of gray wolf, and red wolves are a legitimate, separate wolf species (Canis rufus). Federal law thus requires both to be protected under the Endangered Species Act.
This matters because some, including landowners and local politicians, have argued that since red wolves have at times interbred with coyotes, they may not be unique enough to deserve protection. Others have contended that Mexican gray wolves are too similar to gray wolves. But that’s not the case.
“The data that have accumulated have led us to a very clear conclusion,” says Joseph Travis, a biology professor at Florida State and lead author of the report.
The paper examined reams of research regarding the animals’ lineages, unique behaviors and anatomy, as well as their genetics. (Is the gray wolf still endangered? Depends who you ask.)
“The committee’s review was incredibly thorough and considered all lines of evidence for and against the subspecies and species designations for Mexican gray wolves and red wolves,” says Sean Murphy, a researcher at the University of Kentucky who wasn’t involved in the effort.
“Many previous studies relied on only one or two lines of evidence,” Murphy says, but this group “did an extraordinary job of synthesizing [the data].”

Species in the Canis genus, which includes gray wolves, red wolves, coyotes, and domestic dogs, are unique in that many of them have recently diverged from one another, and do occasionally interbreed. This can make taxonomic distinctions difficult, Travis says.
The Endangered Species Act mandates that threatened and endangered species, in addition to distinct subspecies, be preserved and recovered. Unique groups of endangered species called “distinct population segments” are also protected.
But the act doesn’t apply to some hybrids that are a cross between different species, one example being coywolves: the offspring of coyotes and wolves.
Both Mexican gray and red wolves once roamed vast expanses of North America, and the former were once found widely throughout the U.S. Southwest. A government program to eliminate predators and widespread hunting nearly wiped them out, but a small population of five was found in Mexico in the 1970s. After successful captive breeding, 11 wolves were released into the wilds of western New Mexico and eastern Arizona in 1998, and have grown to a current population of 114, at last count.
Red wolves likewise nearly disappeared, but a small population was taken from Louisiana in the 1970s and captively bred, before being released into a national wildlife refuge in eastern North Carolina. After growing to 50 in number, they have since declined to a population of 35 (and possibly as low as 25), making them the world’s most endangered wolf.
Red wolves are smaller than their gray cousin, and resemble coyotes. The study found some past evidence of interbreeding with coyotes, but not enough to change their fundamental nature; given the choice, red wolves will consort with others of their kind, and will actually actively fight off and kill coyotes that stray into their territory.
However, because the population of red wolves declined so much, some of these animals did mate with coyotes before researchers took them for captive breeding, Travis says.

Red wolves remain especially threatened, and the U.S. Fish and Wildlife Service has come under intense criticism for recent weakening of rules to protect them. In June 2018, the service proposed allowing landowners to shoot the animals if they strayed onto their property, a decision that was harshly rebuked and struck down in court. The service didn’t respond to request for comment.
Meanwhile, 17 Mexican wolves, also called lobos, were found dead in 2018—a record number.
Scientists and conservationists expressed hope that the paper would put to rest an unhelpful debate, and allow for new progress toward the species’ conservation.
“This will hopefully move the discussion at the federal policy level toward effective conservation... and away from controversies about hybridization,” says Kristin Brzeski, a conservation geneticist who studies wolves at Michigan Technological University and wasn’t involved in the paper.
Murphy adds that “the immediate, overarching conservation implication is that Fish and Wildlife Service must ramp up recovery efforts without further delay, and with or without resounding cooperation from relevant state wildlife agencies.”
See our website Let Kids Be Kids. org for more information on our
Advocacy for those Seeking a Voice.
To support our Animal Protection advocacy, or to donate towards our endangered species project see these links:
Universal Giving ,
PayPal Giving Fund , Amazon Smile