Down, but not out! 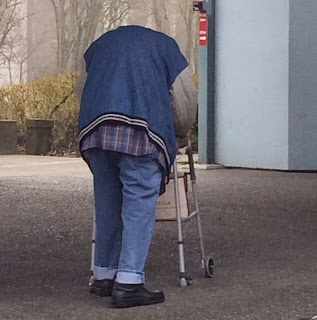 Three days a week I am privileged to drive oldsters to their endless doctor appointments.
The man in the photo, I’ll call him Jim, has been my passenger a couple of times a month for the last year or so. At 88 he is seeing his health spiral downwards rapidly.
Jim has had a heart condition since his thirties.

Recently a doctor told him his heart was operating at about 15% of efficiency. That doctor told him there was nothing to be done, as he wouldn’t be able to handle the major operation that would have a dicey chance of any measurable success. Jim is okay with that-

Last week I took him to three different appointments within a five hour window. The first doctor ran some tests for the second doctor so the third doctor could review the tests done by doctor #1 and doctor #2.
No, these were not at the same facility making it easy for Jim.
Three different facilities with plenty of walking required.
Jim moves so slowly it seems to take forever for him to get from one spot to another. We’ve laughed that he moves so slowly that he’s actually going back in time. He wouldn’t mind going back to those days of teaching at a midwest University.
He has a motorized scooter but its impossible to use considering the van challenges and the various obstacles at the hospital and at the doctors offices.

Watching him shuffle into his third appointment I wondered just what is it we’re doing to each other?

Why does he have to go to three different places when the doctors must know that the strain and stress are just pushing him closer to his final dance with that angel thats waiting to take him away on the last great adventure.
Is it too much to ask that they come together and meet with him?Are those days gone forever?
Are we at the mercy of a system, that we have created, that acts at arms distance just when we want to be held close.Jim and I spoke about it.
He shrugged saying its bad, but the only game in town. That he has a sense of humor about all this is remarkable.

Jim is not a rich man.
I wonder if I’d be driving a rich man to three different facilities?
Jim struggled to make it back to the van after the third appointment.
He was exhausted!
I wish he could be treated differently. Perhaps one of those three doctors could compile all the information and make a “house call” sharing whatever news with Jim where he is comfortable.
I wish for a lot of things…

Email me at letkidsbekids@mac.com if you have any thoughts...