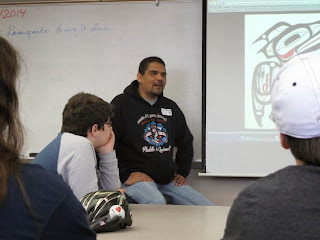 Robert "Ravenspeaker" Frederiksen, Tsimshian, founder of "Natives Rising", addressed 17 & 18 year old students at Seattle's Center High School yesterday.
Center teacher Andy Bell was our host for the day.
Ravenspeaker explained his founding of  "Natives Rising" by speaking of what holds a society together, and what forces can tear a society apart, requiring a "rising of spirit."

In order to best illuminate the challenges he told three stories, one to each class, so the students could learn a little bit about the Tsimshian  (pronounced Sim see Anne) culture and how Ravenspeaker, and his people, view the world.
One story was of an old man who fooled young women with his false beauty. The essence of the story shared the larger morality that exists to hold people together. The importance of respect and honor among the people.
The second story told of a prince who was so in love with a young woman that he would do whatever she asked to win her hand. Over time she had him slice his face and body until he was just a ribbon of a human being.
Ultimately he is saved, and renewed, and she is rejected.
The story speaks to incorporating outside influences that may destroy all that is internally held sacred.
The third story was a legend, versus being an instructive story, that told the creation story of the ever pesky mosquito.
Ravenspeaker shared with the students the tremendous challenges faced by "First Peoples" spread across the country.  "First People", or "Natives" are the preferred terms to the imposed "Native American"category on those who have been here for thousands of years.
He quoted the dismal statistics on school dropouts, unemployment, substance abuse and teen suicide.
The students were shocked by the number of native teens that look at life through a "prism so darkly" that they chose no life to the everyday negative internal messaging they have incorporated.
Ravenspeaker quickly pivoted from these hard to embrace statistics to incorporating the students in ways they could ameliorate the woes he shared.
With very little prompting each class of students came to the conclusion that true "friendship" could turn the status quo.
Friendship that is arrived at though knowledge, empathy, sharing, familiarity, trust, support and faith that a better day is on the horizon.
Every single student said they would be "friends" and would take steps to open themselves up to the "invisible" people who surround them in a city named after a Duwamish chief that few of them know much about-

Ravenspeaker is adept at delivering age appropriate "lessons" through stories, humor, historical and cultural references, group interaction combined with his obvious dedication and enthusiasm to seeing  "a spirit rising" among natives and non natives.

Students enthusiastically grasped his message adding their own insights to what can be done to reach out to each other---
What more could you ask for in a classroom?
Thank you Ravenspeaker-

For more information and how we can help arrange a visit by Ravenspeaker to your business, club or school email us at Let Kids Be Kids.