Where is the Compassion? 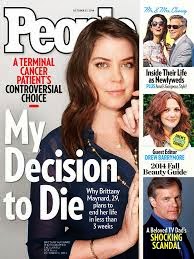 I hope Msgr Ignacio Carrasco de Paula, president of the Pontifical Academy for Life, the Vatican official who called Maynard’s decision to end her life ”reprehensible” reads the following letter from her mom.
Its too bad the Pope chimed in to condemn actions that people take to ease and support those they love---
"I am Brittany Maynard’s mother. I am writing in response to a variety of comments made in the press and online by individuals and institutions that have tried to impose their personal belief system on what Brittany and our family feel is a human rights issue.
The imposition of “belief” on a human rights issue is wrong. To censure a personal choice as reprehensible because it does not comply with someone else’s belief is immoral. My twenty-nine-year-old daughter’s choice to die gently rather than suffer physical and mental degradation and intense pain does not deserve to be labeled as reprehensible by strangers a continent away who do not know her or the particulars of her situation.
Reprehensible is a harsh word. It means: “very bad; deserving very strong criticism.” Reprehensible is a word I’ve used as a teacher to describe the actions of Hitler, other political tyrants and the exploitation of children by pedophiles. As Brittany Maynard’s mother, I find it difficult to believe that anyone who knew her would ever select this word to describe her actions. Brittany was a giver. She was a volunteer. She was a teacher. She was an advocate. She worked at making the world a better place to live.
This word was used publicly at a time when my family was tender and freshly wounded. Grieving. Such strong public criticism from people we do not know, have never met – is more than a slap in the face. It is like kicking us as we struggle to draw a breath.
People and institutions that feel they have the right to judge Brittany’s choices may wound me and cause me unspeakable pain but they do not deter me from supporting my daughter’s choice. There is currently a great deal of confusion and arrogance standing in the way of Americans going gently into the good night. I urge Americans to think for themselves. Make your wishes clear while you are competent. Make sure that you have all the options spelled out for you if you are diagnosed with an incurable, debilitating, painful disease. Do your own research. Ask your family to research and face the harsh reality with you. Ask your doctor to be brutally honest with you. Then make your personal choice about how you will proceed. It is YOUR choice.
The “culture of cure” has led to a fairy tale belief that doctors can always fix our problems. We have lost sight of reality. All life ends. Death is not necessarily the enemy in all cases. Sometimes a gentle passing is a gift. Misguided doctors caught up in an aspirational belief that they must extend life, whatever the cost, cause individuals and families unnecessary suffering. Brittany stood up to bullies. She never thought anyone else had the right to tell her how long she should suffer. The right to die for the terminally ill is a human rights issue. Plain and simple.
Debbie Ziegler
Brittany’s Momma
Posted by Let Kids Be Kids Inc. at 3:53 PM