Do Any Animals Know Their Grandparents? 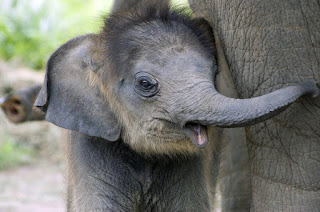 “Grandparents are revered in many human societies. But telling stories about old times and overfeeding grandchildren seem like distinctly human traits. Are these classic grandparent behaviors really limited to Homo sapiens? Do any animals know their grandparents the way people do?
For most species on Earth, the answer is an unequivocal no. "Usually, there just aren't grandparents living anymore" when an animal is born, said Mirkka Lahdenperä, a biologist at the University of Turku in Finland. Even if an animal's life span does overlap with its grandparents', most species spread out to avoid competing for resources, so the odds of running into a grandparent are slim.
But there are a few notable exceptions, primarily among mammals that live in close-knit social groups. In her book "The Social Behavior of Older Animals" (Johns Hopkins University Press, 2009), Canadian zoologist Anne Innis Dagg described troops of langur monkeys in India in which older females commingled with their daughters and grandchildren.
The grandmother langurs have a particular job: They aggressively defend the group's infants against attacks from humans, dogs and rival monkeys. Some female langurs even give their own grandchildren special treatment, grooming them and stepping in when they play too roughly with other young.
Many whale species, too, travel in family pods that include both grandmothers and grandcalves. In groups of sperm whales, according to Dagg, old females help babysit the group's young while their mothers dive for food.
Orca grandmothers often lead their pods and can live for decades after they stop reproducing. (The oldest known orca, nicknamed "Granny," died in 2016 at over 100.) In 2015, scientists writing in the journal Current Biology suggested that these elder orcas help their descendants survive during hard times, because they remember all the best places to find food.
Elephant herds are also famously matriarchal. Calves are typically born into groups led by their grandmothers, who can live to around 80 years old. The females in a herd form close bonds, said Lahdenperä, and collaborate to raise their young.
In a 2016 study in the journal Scientific Reports, Lahdenperä tried to determine if being an elephant grandmother has evolutionary benefits. She analyzed records from a semi-captive population of Asian elephants working for the timber industry in Myanmar. Some adult females still lived in groups with their mothers, while others had been moved to different areas.
Lahdenperä found that the calves of young mothers were eight times more likely to survive if their grandmothers lived near them than if they didn't. When the calves' mothers were older and more experienced at raising babies, this beneficial "grandmother effect" disappeared even if the actual grandmothers were still around, she found.
It isn't entirely clear how elephant grandmothers help their inexperienced daughters, said Lahdenperä. There's anecdotal evidence that they may help nurse their grandcalves, thereby giving them a nutritional boost. But Lahdenperä thinks that the more likely advantage is the wisdom a grandmother elephant has amassed during her long lifetime. If a calf gets stuck in a mud pit, for example, its grandmother might be more successful at helping the calf than its mother would be, because she's seen similar situations.
Indeed, most evidence for the benefits of grandparenting comes from mammals. But in 2010, researchers reported in Current Biology that in colonies of insects called gall-forming aphids (Quadrartus yoshinomiyai), older females defend their relatives after they've ceased to reproduce. And a 2007 study in the journal Evolution found that older female Seychelles warblers (Acrocephalus sechellensis) sometimes help their offspring raise chicks.
And what about grandfathers? Studies of humans in recent decades have shown that a living grandfather can improve a person's mental health and other indicators of well-being, said Lahdenperä. But there's no evidence of that in the animal kingdom, she said. Male animals rarely socialize with their own progeny, let alone any further descendants. "Males are usually focusing on producing [more of] their own offspring, and aren't providing so much care," Lahdenperä said.”
See our website Let Kids Be Kids. org for more information on our
Advocacy for those Seeking a Voice.
To support our Animal Protection advocacy, or to donate towards our endangered species project see these links:
Universal Giving ,
PayPal Giving Fund , Amazon Smile