Sitting next to Lincoln at Ford's Theater 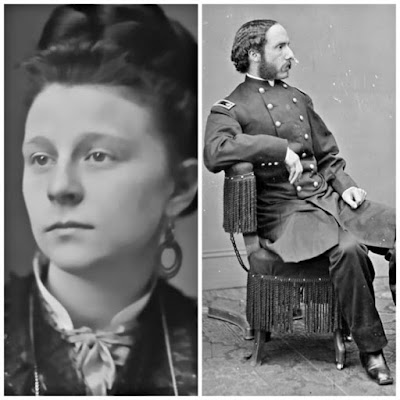 "It's been 154 years since assassin John Wilkes Booth crept into the Presidential Box at Ford's Theater and fatally shot Abraham Lincoln. You know how the story ends: Lincoln died the next morning, Booth was shot and killed days later on April 26, and Mary Todd Lincoln was left to mourn her shattered family.

But the Lincolns weren't alone at the performance of Our American Cousinthat night. General Ulysses S. Grant and his wife, Julia, declined an invitation to accompany the President and the First Lady, deciding to visit their children in New Jersey instead. This was an unfortunate turn of events for Booth, who had been hoping to take out both Grant and Lincoln in one fell swoop.
The Lincolns extended invitation after invitation, but were repeatedly turned down for various reasons. They finally received a "yes" from Clara Harris, daughter of New York Senator Ira Harris. The senator's daughter had become friends with Mary Todd from attending various social engagements in Washington. Harris's date for the evening was her fiancé, Major Henry Rathbone (who was also her step-brother).
After Lincoln was shot, Rathbone tried to grab the assassin. Booth responded by using a Bowie knife to slash Rathbone's arm, splitting it open from shoulder to elbow and slicing through a major artery. The massive amounts of blood later found in the Presidential Box mostly belonged to Rathbone, not Lincoln, who actually bled very little.
In 1867, after all of the assassination hoopla had calmed down, Rathbone and Harris were finally married. They had three children (one born on what would have been Lincoln's 61st birthday) and, in 1882, moved to Germany, after he was appointed the U.S. Consul to Hanover.

In the nearly two decades that had passed since Lincoln's assassination, however, Rathbone's mental health had severely declined. He became increasingly obsessed with the idea that Clara was going to leave him, to the point that he forbade her from sitting by windows. He began hallucinating, and even admitted that he was afraid of himself.
G.W. Pope, Rathbone's doctor, believed the night at Ford's Theater had caused post-traumatic stress: "He never was thoroughly himself after that night . . . I have no hesitation in affirming that the dreaded tragedy, which preyed upon his nervous and impressionable temperament for many years, laid the seeds of that homicidal mania."

On December 23, 1883, an erratic Rathbone made a move toward the children's bedrooms that alarmed Clara. Believing that he intended to harm them, Clara blocked his way and managed to get him back to their bedroom. That's when he shot her several times, then stabbed her with a knife, which he then turned on himself.

Rathbone was admitted to a hospital for the criminally insane, residing there until his death in 1911. Their children were raised by Clara's sister and her husband. Henry and Clara's son, Henry Riggs—the one born on Lincoln's birthday—later became a Congressman. Proving that he wasn't bitter about his parents' fateful night out with the Lincolns, Henry Riggs Rathbone headed an unsuccessful attempt to get the government to make a Lincoln Museum at Ford's Theater. When that failed, he worked to help preserve the Petersen House where Lincoln died, including a collection of artifacts from the evening. One artifact that he didn't preserve: his mother's blood-soaked dress. He had it burned in 1910, believing that it had been a curse upon his family."
* "In 1910, the year before his father’s death, Henry Riggs Rathbone reportedly broke down the brick wall his mother had built decades ago to shut out the past, recovered her blood-stained dress, and set it ablaze—an attempt to put an end to what he felt was a family curse." Smithsonian