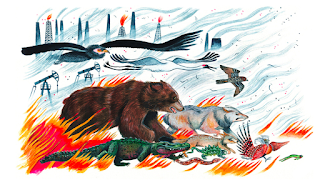 The Species Act, Endangered: ‘Like a Plan From a Cartoon Villain’

The president and his Interior Department undermine the landmark Endangered Species Act in the service of “energy dominance.”
By The Editorial Board
The editorial board represents the opinions of the board, its editor and the publisher. It is separate from the newsroom and the Op-Ed section.

See www.letkidsbekids.org on how you can help.
Posted by Let Kids Be Kids Inc. at 9:28 AM