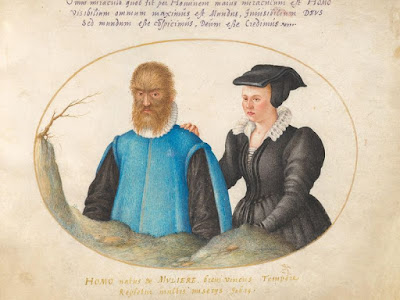 
“This summer, more than a dozen parents across Spain noticed unusually high amounts of hair appearing all over their children’s bodies. Now, Oriol Güell reports for El País, authorities have identified the culprit behind this unexpected growth spurt. As the Spanish Agency of Medicines and Medical Devices (AEMPS) confirmed earlier this month, the 17 individuals affected developed hypertrichosis—a condition colloquially dubbed “werewolf syndrome”—after taking anti-baldness medication mislabeled as acid reflux treatment.
Speaking with Güell, Ángela Selles, a mother whose son had at least two bottles of syrup containing the anti-hair loss drug, says her six-month-old’s “forehead, cheeks, arms and legs, hands became covered in hair.” She adds, “He had the eyebrows of an adult. It was very scary because we didn’t know what was happening to him.”
According to Agence France-Presse, the outbreak stemmed from a mix-up at the Farma-Química Sur laboratory in Málaga. As health minister Maria Luisa Carcedo explained to reporters Wednesday, staff accidentally put minoxidil—the active ingredient in Rogaine—into containers marked as the heartburn treatment omeprazole. These mislabeled drugs were then distributed to pharmacies, where they were prepared as syrups for specific patients.
Sources within AEMPS tell El País that the error occurred during packaging, not production of the original pharmaceutical compounds, which were imported from a separate company based in India: “It’s not that omeprazole was mixed with minoxidil, but rather that the package leaflet said one thing and the pharmacy another.”
Per an AEMPS press release, all affected batches of omeprazole have now been withdrawn from the market. In an interview with Granada Hoy, Manuel Fuentes, president of the Official College of Pharmacists of Granada, offered additional reassurance to those still wary of the popular reflux drug, emphasizing that the omeprazole used in children’s syrup is distinct from the kind used in adults’ capsules.
Officials suspended operations at Farma-Química Sur earlier this week, and the New York Times’ Raphael Minder reports that several families impacted have already filed lawsuits against the laboratory.
Although dermatology experts say the children struck with hypertrichosis should start losing their excess hair within three months of discontinuing treatment, some parents report otherwise. As Amaya, the mother of a 26-month-old who drank the minoxidil-laced syrup, tells El Mundo’s Ana María Ortiz, her daughter stopped taking the medicine in mid-June, but she remains covered in hair. Another unidentified mother shared similar updates with El País, saying her baby’s hair has started to fall off but is only happening “little by little.”
Minoxidil’s effects on children’s health are little-studied, leaving parents uncertain of what to expect as their sons and daughters start recovering. Selles, the mother of six-month-old Uriel, reports that testing has shown signs of liver damage, although doctors tell her the condition “is not serious and that [the organ] will regenerate.”
Speaking with Ortiz, Amaya says that authorities are “trying to minimize the seriousness of the matter.”
She adds, “Thank God that the symptom was as noticeable as excess hair. If it had been a latent thing that was gradually affecting internal organs, [my daughter] would have certainly continued to take [the wrong formula]."
( Re-printed/copied to allow those without magazine/newspaper subscriptions an opportunity to read articles)