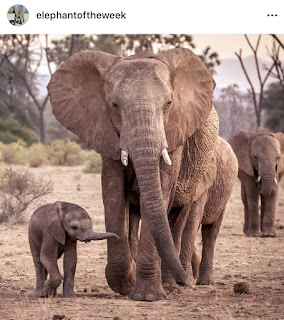 If the species is wiped out by poachers, Africa’s vast rain forest will lose 7 percent of its carbon storage ability, scientists estimate.
( Re-printed/copied to allow those without newspaper subscriptions an opportunity to read articles)
By Rachel Nuwer - NY Times  19 August ‘19
“Poaching destabilizes nations, disrupts ecosystems and threatens biodiversity. A recent study suggests still another consequence: Some types of poaching may also accelerate climate change.
Forest elephants — the smaller, endangered relatives of African savanna elephants — promote the growth of large trees that excel at storing carbon, according to research published in the journal Nature Geoscience.
Should forest elephants disappear, scientists estimated, Central Africa’s rain forest will lose about three billion tons of carbon — the equivalent of France’s total CO2 emissions for 27 years.
“This new paper points to something that we in Central Africa have suspected for a long time, but now this group has thrown some serious science at the issue,” said Fiona Maisels, a conservation scientist at the Wildlife Conservation Society and at the University of Stirling in Scotland.
“With the loss of forest elephants,” she added, “loss of carbon stocks can be added to the list of ecosystem services that are no longer provided by these animals.”
Over recent years, researchers have gained a more detailed understanding of the links between animals and climate. Wild grazers, for instance, can reduce the intensity and frequency of fires that emit greenhouse gases. Methane emissions from livestock significantly contribute to global warming.
Scientists have also known for decades that large herbivores such as elephants play important short-term roles in ecosystems by promoting biodiversity, recycling nutrients and dispersing seeds.
Fabio Berzaghi, an ecologist at the Laboratory of Climate and Environmental Sciences in France and the lead author of the new study, suspected that elephants might also play a profound long-term role in shaping Africa’s rain forest, second in size only to the Amazon’s.
The Amazon lost its large herbivores 12,000 years ago, among them ground sloths that weighed over three tons, elephant-like creatures called gomphotheres, and armadillo-like glyptodonts that were the size of small cars.
The loss of these and other large herbivores likely contributed to the Amazon’s higher density of smaller trees, with a lower overall amount of vegetation compared with Africa’s rain forest.
“We were thinking elephants may play a role in the differences between these two continents’ forests,” Dr. Berzaghi said. “We also really wanted to know what the long-term consequences of losing this species would be.”
Dr. Berzaghi and his colleagues selected two field sites. One lies in the Democratic Republic of Congo, from which elephants disappeared 30 years ago because of poaching; the other is the Republic of Congo, where elephants lived at high numbers until recently.
Both sites were relatively pristine and differed only in the presence or absence of elephants. The researchers measured the trunk size of all the trees in the study areas and noted the species, giving them an idea of the short-term effects of elephant loss.
To determine the long-term effects, they created a computer model that simulated the basic functions of the African rain forest, including tree growth and death, competition, photosynthesis and reproduction. The model allowed them to include or exclude elephants.
Forest elephants almost exclusively stomp down trees with a diameter of 12 inches or less, and they prefer to eat fast-growing softwood trees. By clearing the understory of vegetation, the researchers found, elephants not only alter plant composition but also affect light penetration and water availability.
This results in an ecosystem that favors large, slow-growing hardwood trees. Such species store significantly more carbon than the equivalent volume of smaller softwood trees.”
Posted by Let Kids Be Kids Inc. at 3:22 PM