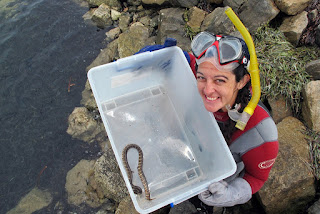 She Studies Sea Snakes by the Seafloor

Sea snakes are the most diverse group of marine reptiles in the world, but they are poorly understood and threatened by development. Blanche D’Anastasi is among the scientists working to save them.
( Re-printed/copied to allow those without newspaper subscriptions an opportunity to read articles)
By Devi Lockwood - Aug. 19, 2019 - NY Times Science Section
“Six to eight million years ago, a snake related to swamp snakes or tiger snakes slithered into the sea. Over evolutionary time, descendants of that snake developed flattened paddle tails, an ability to breathe through the skin and a valve to stop water from entering the lungs. Today these creatures live their entire lives in the water. Clad in spots, triangles and stripes, they undulate across coral reefs or meadows of sea grass.
There are some 70 species of sea snakes in the world; they live in the Indian and Pacific oceans, in water less than 600 feet deep. Half of all species can be found in Australia, and they are particularly visible during their mating period, in July and August.
But sea snake populations have been declining rapidly for the last 20 years worldwide, as a result of climate change, pollution, fishing, habitat loss, mining exploration and disease. Although sea snakes are the most diverse group of marine reptiles — they outnumber sea turtle species by 10 to one — less is known about their ecology than that of any other group of reptiles.
This is because the research is difficult. If you want to find a sea snake, you have to go out searching for one.
Blanche D’Anastasi, a sea snake researcher at James Cook University in Queensland, Australia, travels to remote regions like Exmouth Gulf, on the country’s northwest coast, to find sea snakes in the wild. Sometimes she scuba dives or snorkels, but the most efficient technique is to be towed behind a boat while wearing a snorkel. When she spots a snake, Ms. D’Anastasi dives down to catch it in a bag.
“Sometimes one will swim up to me and lick my mask and neck,” she said. Others hide by swimming to the floor and sticking their heads in the sand near sea grass. Perhaps they are impersonating it.
Back on the boat, she collects a sliver of tail tissue, takes photos, measures the snake and sets it free. In her lab, she analyzes the animal’s genetic diversity.
Ms. D’Anastasi initially pursued a Ph.D. on the genetic diversity of sharks and rays. She shifted her focus to sea snakes after learning about the decline in their numbers.
The switch “felt like setting myself adrift in a warm, wild ocean current,” Ms. D’Anastasi said. “It was a scary step to take. I didn’t fully comprehend, at the time, the positive impact that this would have on my life and the conservation of sea snakes.”


Land-based lizards and snakes have sensilla, bumps on their head scales that are used to sense objects through touch. The sensilla of sea snakes are dome-shaped and protrude farther, possibly enabling them to detect vibrations underwater.
“I have always wondered how sea snakes seem to know I am there before they see me,” Ms. D’Anastasi said. “Sometimes I see a tail or body coil sticking out from under a ledge, and before I get close the snake has popped its head out for a look.”
This sensitivity to underwater vibrations also makes sea snakes vulnerable to engines and other human-generated noises. Seismic testing, which relies on loud underwater blasts to explore for oil and gas, likely damages their hearing, which would disrupt their ability to hunt and hide in the wild.
Sea snakes occupy the middle of the food web. Most feed on fish and eels. Sea eagles, ospreys, crocodiles and sharks eat them. They gravitate toward structurally complex habitats that provide places to hunt, rest and hide: coral reefs, estuaries, sea grass beds and mud flats. Many sea snakes are specialized to hunt particular prey — damselfish eggs, frog fish, gobies. As a result, 10 or more species may live in the same habitat.
Where they occur, they are abundant. “Turtle-headed sea snakes are reluctant to move even one kilometer to breed with snakes in the next bay,” Ms. D’Anastasi said. At least 15 species of sea snakes live in Exmouth Gulf, including two species previously thought to be extinct: the leaf-scaled sea snake, Aipysurus foliosquama, and the short-nosed sea snake, Aipysurus apraefrontalis. To protect the full range of genetic diversity, management is necessary.
The Timor Sea, extending from Australia’s northwest coast to the southern coast of Timor, is a hot spot of sea snake biodiversity. Exmouth Gulf, a 1,600-square-mile estuary nearby on the Indian Ocean, has remained relatively untouched. It supports more than 1,800 species of fauna; critically endangered sawfish use the area as a pupping ground, and at least 15 species of sea snakes live there. Seven of them are genetically highly distinctive, compared to snakes on the Great Barrier Reef, and they may be new species entirely. “I am sure that once we start looking, we’ll find more,” Ms. D’Anastasi said.
“This place is teeming,” said novelist and environmental activist Tim Winton. “It’s alive.”
But the region has experienced rapid industrialization in the past two decades. Outside the Middle East, Australia’s northwest shelf is one of the largest oil- and natural-gas producing regions in the world. A development project proposed by Subsea 7, an energy company, would allow six-mile-long lengths of pipeline to be towed through a shallow portion of Exmouth Gulf. The proposal is currently being evaluated by the Environmental Protection Authority in Western Australia.
Although some jobs would be created from industrializing Exmouth Gulf, this “seems like a poor deal when you consider the environmental impact,” said Ben Fitzpatrick, ecologist and director of Oceanwise Australia, a research organization. The group recently published a report highlighting the biodiversity in Exmouth Gulf and the scientific research ongoing there.
Conserving Exmouth Gulf may allow Western Australian sea snakes, including those yet to be described by scientists, a chance at survival, Dr. Fitzpatrick said. The Ningaloo Reef, near Exmouth Gulf, is a World Heritage Site. Scientists like Ms. D’Anastasi are trying to extend the protection to Exmouth Gulf and the sea snakes that live there.
“As a scientist, sometimes it’s hard because you need to be the honest broker and walk that neutral line and just provide the advice,” Ms. D’Anastasi said. “But we’re in an age where that’s just not enough.”