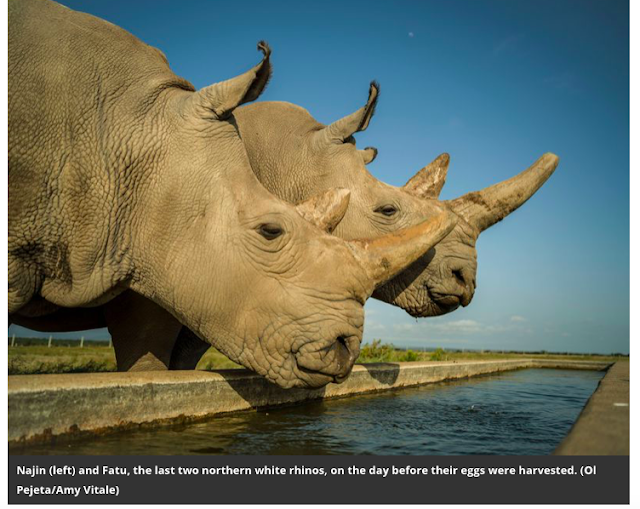 ( Re-printed/copied to allow those without newspaper subscriptions an opportunity to read articles)
Jason Daley - Smithsonian Magazine 23 August 2019
"In March 2018, the death knell rang for the northern white rhino when a 45-year-old male named Sudan passed away at the Ol Pejeta Conservancy in Kenya. That left only two individuals of the subspecies, Ceratotherium simum cottoni, left on Earth, both females. However, neither is capable of giving birth since 30-year-old Najin has lesions on her uterus and her daughter Fatu, 19, has bad hind legs that could complicate pregnancy. It seemed as if the northern white rhino was destined for oblivion.
But there’s a new hope for the subspecies reports Fran Blandy at AFP. Yesterday a highly skilled international veterinary team successfully extracted eggs from both Najin and Fatu at Ol Pejeta during a two-hour surgery.
“It was a great success, yesterday ten oocytes were harvested which was about the number we hoped for” team member Jan Stejskal of the Dvur Kralove Zoo in Czech Republic tells Blandy.
The eggs have been airlifted to a laboratory in Italy and will be combined with frozen sperm collected from four deceased northern white rhino bulls, likely by the end of the week. The embryos will then, at a future date, likely be implanted in surrogate southern white rhinos for the 14-month gestation.
According to a press release, this wasn’t just some experimental operation. It’s part of years of planning and experimentation designed to save the species. Helen Thomson at Nature reports that, in July 2018, researchers practiced the technique by collecting eggs from southern white rhino females, the other subspecies which numbers over 20,000. They then fertilized the egg with frozen sperm collected from deceased northern white rhinos and the eggs developed into hybrid blastocysts.
Now, researchers hope to also create blastocysts from the frozen northern white rhino sperm and the eggs collected from Najin and Fatu to create pure northern white rhino embryos. But, Rebecca Boyle at Discover reports, that’s still an iffy proposition. It’s not known if southern whites can carry a northern white to term, or if the different genetics of the two subspeceis could cause problems. And even if the procedure does produce a calf, there’s a chance that the offspring could be sterile.
If the in vitro process works out, conservationists still face another problem—the preserved gene pool for the northern white rhino is tiny, just a few sperm samples from deceased males and the eggs from Najin and Fatu, who are closely related. To get around that, another group is working on producing artificial gametes—egg and sperm—from preserved skin tissue from 12 white rhinos. So far, reports Thomson, researchers have developed five lines of “induced pluripotent stem cells” and they believe they can coax them into becoming artificial sperm and egg cells in the near future.
All of that research is being conducted under the banner of a new research consortium called the BioRescue project, which will take what it learns from working on the white rhino and apply it other endangered species.
“As scientists we are gaining so [many] results and information about reproduction biology and assisted reproduction that can and will help other species which are not so close to the verge of extinction as the northern white rhino,” Frank Goritz, head veterinarian at the Leibniz Institute for Zoo and Wildlife Research, a participant in the project, tells Blandy at AFP.
The northern white rhino once inhabited the modern nations of Uganda, the Central African Republic, Democratic Republic of Congo (DRC), Sudan and Chad. According to the conservation group Save the Rhino, in 1960, there were still 2,360 northern white rhinos in their natural habitat. Poaching and ongoing civil wars in the region, however, brought the population down to just 15 by 1984, all of them in Garamba National Park in the DRC. Rescue efforts brought the number up to 30 by 2003, but poaching once again took its toll and no live rhinos have been seen in the wild since 2006.
In 2009, four of the eight remaining northern white rhinos, Najin, Fatu, and the males Sudan and Suni, were transferred from the Czech Republic to Ol Pejeta in the hopes that returning to their natural habitat would spur them to reproduce. They did not, and one by one the aging captive rhinos died off, until just Najin and Fatu remain, with human technlogy as the species' only hope.
“On the one hand Ol Pejeta is saddened that we are now down to the last two northern white rhinos on the planet, a testament to the profligate way the human race continues to interact with the natural world around us,” Richard Vigne, managing director of Ol Pejeta says in the release. “However we are also immensely proud to be part of the ground breaking work which is now being deployed to rescue this species. We hope it signals the start of an era where humans finally start to understand that proper stewardship of the environment is not a luxury but a necessity.”