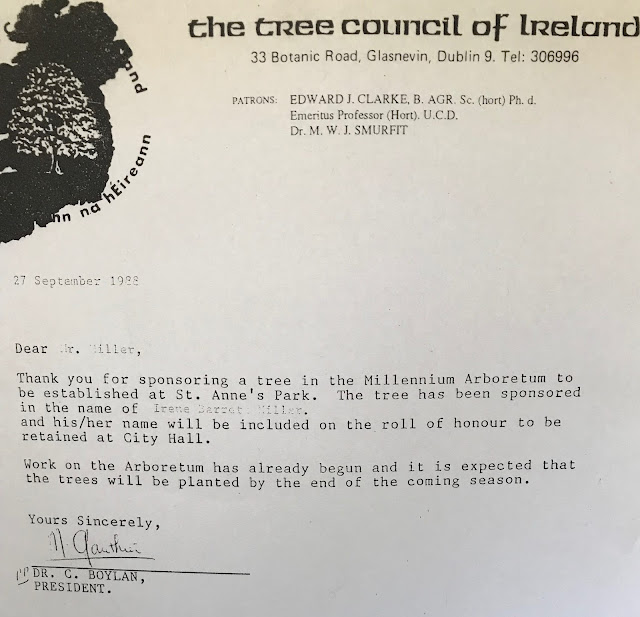 Irene Barrett Miller is one of the 1000

To celebrate Dublin's Millennium year in 1988, the Parks Department in co-operation with the Tree Council of Ireland, initiated the Millennium Arboretum. Consisting of 16 acres located between the main avenue and St. Anne's housing estate, the arboretum is planted with over 1000 types of trees and was sponsored by 1000 participants.

Farm land to be used for some of the 8,000 hectares of new forestry every year

Sat, Aug 31, 2019, 18:18 - Irish Times
Brian Hutton
( Re-printed/copied to allow those without newspaper subscriptions an opportunity to read articles)
“Twenty-two million trees are to be planted every year in Ireland over the next two decades as part of a plan to tackle climate change, the Government has said.
While the Government’s climate action plan, published in June, proposed 8,000 hectares – or 19,768 acres – of new forestry every year in a bid to capture carbon emissions, it did not specify the number of trees involved.
In its latest calculations, it suggests this will involve 2,500 conifers or 3,300 broad-leaf trees for every hectare planted.
The target is for 70 per cent conifers and 30 per cent broad leaves.
“The climate action plan commits to delivering an expansion of forestry planting and soil management to ensure that carbon abatement from land-use is delivered over the period 2021 to 2030 and in the years beyond,” a Department of Communications Climate Action and Environment spokeswoman said.
“The plan sets out key actions to be taken by the Department of Agriculture.
“The target for new forestation is approximately 22 million trees per year. Over the next 20 years, the target is to plant 440 million.”
The ambitious plan would mean a significant shift in the use of farming land in Ireland.
The climate action report acknowledges a lack of enthusiasm among the farming community for forestry.
A key part of the plan will be to persuade farmers to designate some of their holdings for tree-planting in the future.
Government-organised town-hall-style meetings are being held throughout the country to encourage communities to support the targets.
Also proposed under the plan, is a massive increase of electric vehicles (EVs), up by an average of 100,000 annually over the next decade, to reach almost one million EVs by 2030.
Some 50,000 homes will need to undergo deep retrofits each year to meet the the plan’s targets.”