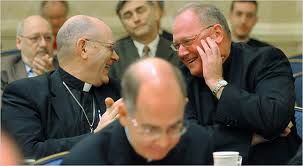 Is this the way it should be???
Supreme Court rules against the rights of employees!!
Limited worker rights...
No recourse if fired for "religious" reasons...

“…In what may be its most significant religious-liberty decision in two decades, the Supreme Court on Wednesday for the first time recognized a "ministerial exception" to employment-discrimination laws, saying that churches and other religious groups must be free to choose and dismiss their employees without government interference…”
"The interest of society in the enforcement of employment-discrimination statutes is undoubtedly important," Chief Justice John Roberts Jr. wrote in a decision that was surprising in both its sweep and unanimity. "But so, too, is the interest of religious groups in choosing who will preach their beliefs, teach their faith and carry out their mission."

What this means in reality is that anyone who works for a religious organization can be dismissed by that organization if the employer deems the employee is teaching, or acting, or in conversation sharing a thought, that may be considered au contraire to their particular interpretation of the tenets of their faith.

Unfortunately, the way this has been applied over the ages, and in a recent Seattle court case, has nothing to do with teaching religion or being in anyway responsible for religious teaching beyond ones capacity as an employee.

In the Seattle Archdiocese employees are caged in the language of their contract and in the accompanying employee handbook that states they must walk the talk of the Catholic Church irrespective of whether or not they are a secretary or a math teacher. In the Archdioceses view all employees are an extension of the spreading of the faith and fall under Ministerial Exception.
That this concept is a stretch seems to have eluded the Supreme Court.

A recent Seattle case involved a teacher who blew the whistle on his principal for stealing. Here are excerpts from Sean Taeschner’s case, the teacher who was fired and won against the church claiming their exception.
“…Judge Michael Hayden stated that Mr. Taeschner was a state-certified teacher and mandated reporter and there to protect children first…” The judge said he was not going to rule against teachers that might fear turning in perceived illegal activities by church staff or other officials to authorities and lose their means of making a living…” The church appealed twice and lost. A financial settlement was awarded Mr. Taeschner at the cost of him never working for his beloved church again-

A computer employee in Yakima, Washington, was fired for reporting the contents of a priest’s computer to his boss, the bishop. The priest, who had asked this employee to look at his computer because he was having problems, swore the employee had put the questionable contents on his computer. The employee attempted to sue but lost his case, as he did teach a religion course making his claim invalid in the eyes of the court and their acceptance of the churches claim.

Another employee, a teacher, orchestrated outreach to people suffering from HIV/AIDS. When he bristled at the charge he was “promoting the gay agenda” to students he was ultimately fired for teaching contrary to the teachings of the church. He did not teach religion or take part in any religious observations, rituals or professions of the faith.

None of the above could receive unemployment as the church chooses to take their exemption from paying into unemployment.

Thanks to the Supreme Court religious organizations can pretty well do what they want towards their employees.