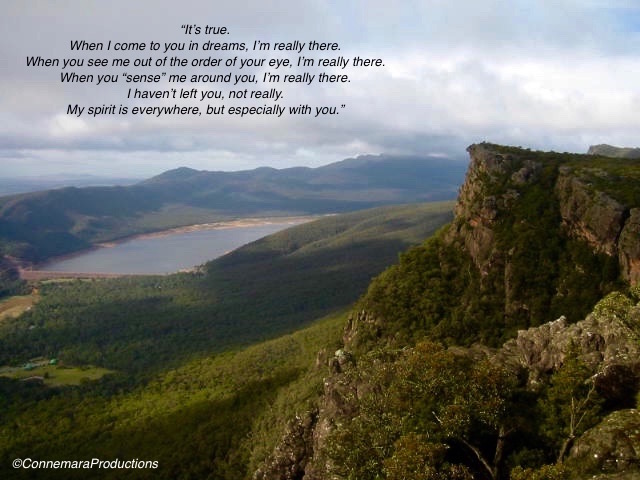 Last night I had one of those great dreams. One that seems to last for hours. A lady I haven't seen in years spent time talking, laughing, crying, hugging with me until the break of dawn. I have crystal memory of our time together in dream space including the long conversation we had on a number of topics. When I awoke it was if it had really happened on this plane of reality. Hope she returns soon-
___________________________________________________
I took the photo in the Grampians while traveling between Geelong and Adelaide along the Great Ocean Road.
"The Grampians, a majestic island of mountain and forest rising out of flat farmland in Victoria's west. Its national parks are home to a huge array of native plants and animals and a rich and continuing Aboriginal history.
Most of Victoria's Aboriginal sites are here in the Grampians, known as Gariwerd to the Aboriginal clans who have been connected to the place for over 22,000 years. Evidence of their lives - including ancient oven mounds and 60 rock art sites with more than 4,000 different motifs - is scattered across the region.
Visit the famous Bunjil's Shelter and see Bunjil, the traditional creator of the land, depicted with his two dingoes. Walk round the Ngamadjidj Shelter and see Ngamadjidj's spirit dancing with white figures on the walls. Gulgurn Manja translates to 'hands of young people', and this shelter in the Northern Grampians is covered with small, red ochre handprints. You can also browse the Grampians' cultural centre or take a guided tour from Halls Gap for a richer understanding of Victoria's five Aboriginal communities..."
More info on http://www.australia.com/en/places/vic/vic-grampians.html
Posted by Let Kids Be Kids Inc. at 3:41 PM