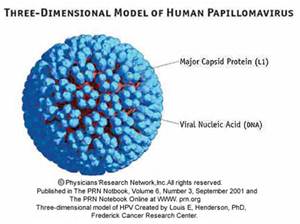 Hey parents. Ensure your kids safety with a vaccination.
"Though the first preventive human papillomavirus (HPV) vaccine was approved by the U.S. Food and Drug Administration 10 years ago, the incidence of HPV-associated cancers is on the rise.
From 2008 to 2012, the number of HPV-associated cancers diagnosed per year increased by approximately 16 percent compared with the previous five-year period, according to a new report by the Centers for Disease Control and Prevention (CDC).
Nearly all sexually active individuals in the U.S. will get at least one type of HPV in their lifetime, making it the most common sexually-transmitted infection in the country. And though about 90 percent of HPV infections will clear a person’s system within two years, some infections persist and can cause cervical cancers and some types of vulvar, oropharyngeal, penile, rectal and cancers.
There are over 40 HPV types, and vaccines are available for HPV types 16 and 18 (which account for 63 percent of HPV-associated cancers), as well as for types 31, 33, 45, 52 and 58 (which account for an additional 10 percent). Type 16 is the most likely to persist and develop into cancer.
In this new report, the CDC analyzed data from its own National Program of Cancer Registries as well as the National Cancer Institute’s Surveillance, Epidemiology and End Results (SEER) database. In total, 38,793 HPV-associated cancers (11.7 per 100,000 persons), on average, were diagnosed annually from 2008 to 2012 compared with 33,369 diagnoses (10.8 per 100,000 persons) from 2004 to 2008. Researchers then multiplied the number of cancers that could have been associated with HPV by the rate actually believed to be attributable to HPV, and found that an estimated 30,700 (79 percent) of the cancers could have been attributed to the virus.
The report highlights numerous challenges to controlling HPV-related cancers. First, not enough adolescents are receiving all three HPV vaccines. The CDC recommends that all males and females should start the HPV vaccine series at the age of 11 or 12 years. The CDC also notes that males can receive the series through age 21 and females can receive it through age 26.
According to this CDC report, though, in 2014, just 60 percent of females aged 13 to 17 received at least one dose, 50.3 percent received at least two doses and 39.7 percent received three doses. Among males, the rates were worse: 41.7 percent received at least one dose, 31.4 percent received at least two doses and 21.6 percent received three doses.
Additionally, differences exist between races. In the 2008 to 2012 study, rates of cervical cancer were higher among blacks compared with whites and higher among Hispanics compared with non-Hispanics. Rates of both vulvar and oropharyngeal cancers were lower, however, among blacks and Hispanics versus whites and non-Hispanics, respectively. Rates of anal cancer were lower among black women and Hispanics, but higher among black men, compared with their counterparts"